The Lenten Jouney Ends At the Cross

Posted on March 26, 2020 by Alan A. Malizia: Contagious Optimism! Co-Author 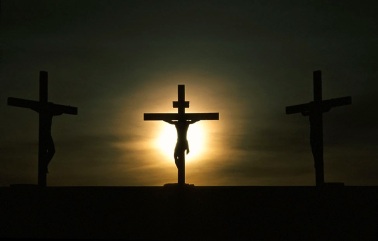 Unlike we, Christ came into the world not to live, but to die.  For 30 years He obeyed in being raised, nurtured and educated through His parents; Mary and foster father, Joseph.  For 3 years He taught. And for 3 hours He suffered. The last 3 hours are for which God had commissioned Him. He didn’t come for a political revolution, but a spiritual one. Not to free one from another’s oppression but to free one from original sin. He came to turn the world right-side up by turning it upside down. And for that reason He was nailed to the cross. For in not bringing peace, but instead turmoil, those in places of honor were challenged for their incompetence and out right self aggrandizement. The powerful, whether political or religious leaders, were threatened because the trust of the people was now with the perveyer of Divine absolute truth rather than the random reality of their present world circumstance.

This is the season of Lent. Which for many Chriatians is a time of reflection, soul searching, sacrifice, charitable efforts and amending one’s ways. It is like a mini purgatory. A purging of self from that which distances us from Christ. A strain on our relationship. For as Dante says: “In His will is our peace.” And true peace is known only through Him, with Him and in Him. Lent is often observed in practice by not all Christians. Not because of any denominational differences but by individual seriousness and dedication or lack thereof. However, this Lent has been forced upon us. Not by God or man, but by an act of God which arose out of the nature of His creation. Semi-isolation, distancing, disciplined self care, cleanliness out of a compelled concern, hopefully, for the most vulnerable. In a simple term; sacrifice. Not as some would give up a favorite treat, spend time with the needy or alms give. But, rather, a change from life as we know it for an indefinite period of time due to the Coronavirus which originated in China and has reeked havoc throughout the world both physically and economically.

The things that men seek are not found on the cross. Men and women seek 4 things in life; pleasure, wealth, power and honor. Let’s examine Christ on the cross as regards these 4 things. We can see that they are absent. Pleasure? NO, He was bruised and bleeding by scourging and all sorts of physical abuse.  Wealth? No, He but possessed the limited clothing left on Him. And His tunic and robe were taken from Him and gambled upon. Power? No, He was pinned to the cross. Honor? No, He was ridiculed, spat upon, humiliated and betrayed. Yet He embraced the cross. Why? Because for this reason he came into the world. To testify to the truth and to die for it. And in so doing would heal the wound of sin for all mankind and remove the sting of death. By enduring the cross He needed but a loaned tomb. For such a place could not forever harbor the light of the world. Lent leads to the cross. The requisite for eternal life is the cross. There is no Easter without Good Friday. All pain and suffering has value in that is the requisite for a greater good. Christ tells His followers: ” You will do what I have done.” The grave has no more power over a believer in Christ than Christ Himself.

So we find ourselves this Lent in a forced participation. We can curse and grind our teeth and exploit the situation for selfish endeavors and desires or we can take up our cross and follow Him in sacrifice, patience, perseverance, and caregiving to others who may be suffering for the loss of loved ones by this virus or confined to their homes to avoid spreading it or due to frailty. We can choose to be selfish or selfless. We can disregard the advice of the professionals and do as we wish or heed their direction and give aid to others and protect the vulnerable by prudent actions. How one spends one’s Lent determines their reaction to the eventual confrontation with the cross. Will we be like one thief who wanted to be taken down from the cross or the other who wanted to be taken up. Will we embrace the cross or be repulsed by it. What one chooses determines the strength or weakness of character. The good thief remained a thief to the end. For in willing to hang there with Christ he became one with Him. And in so doing, he stole heaven.

As regards the Cross: “It is human to come down. It is Divine to hang there.” – Venerable Fulton J. Sheen