Posted on May 1, 2018 by Alan A. Malizia: Contagious Optimism! Co-Author

“When John, who was in prison, heard about the deeds of the Messiah, he sent his disciples to ask him, “Are you the one who is to come, or should we expect someone else?”

“Jesus replied, “Go back and report to John what you hear and see: The blind receive sight, the lame walk, those who have leprosy are cleansed, the deaf hear, the dead are raised, and the good news is proclaimed to the poor.” – Matthew 11: 2-5

Man is not capable of understanding God in His entirety and therefore fails to recognize Him; even John the Baptist sought assurance. This is why faith is key, because assurances are not always at the ready. Faith is the belief in the unseen with the reward of one day seeing what you believe. Jesus asks us to trust in Him, that His promise will be fulfilled in that He is the Word of God. Jesus also knows that man at times needs something more concrete than words to accommodate this human inability to comprehend God fully. The miracles accomplish this. This lack in understanding of man toward God is like a mouse who fails to understand that the piano keys he is gnawing on holds a higher purpose by aiding in the performance of a concerto.

There is in prayer a need also to be shown something for the effort if it is to maintain a level of credibility. The main purpose of prayer, though, is the means by which man communicates with his Maker. We go to Him, as a child to his Father, with our petitions, gratitude, praise and love. Yet we deny ourselves His grace when the dialogue is one way; ours. When we stop the output and remain silent we then are open to receive input from God. Limit our voice to maximize His. Prayer can be powerful if we but allow it to be so.

God often gives us real life validation of the power in prayer. Sometimes these validations are perceived as coincidence. But certain unexplainable events have proven to be miraculous, thereby, making coincidence a fool’s argument. The following article, written by Gretchen Filz (October 11, 2016), reveals one truly stunning event in history as a most convincing example.

August 2015 marked the 70th anniversary of the atomic bombs dropping on the Japanese cities of Hiroshima and Nagasaki, initiating the end of World War II. You may have heard the miraculous story of Fr. Hubert Schiffer and three of his fellow Jesuit missionary priests who survived the atomic blast by faithfully praying the rosary. The bomb exploded just 8 blocks from the Jesuit Church of Our Lady’s Assumption in Hiroshima.

Here is what happened:

“Suddenly, a terrific explosion filled the air with one bursting thunder stroke. An invisible force lifted me from the chair, hurled me through the air, shook me, battered me, whirled me ’round and ’round like a leaf in a gust of autumn wind.”

The four priests lived in a rectory within the radius of complete atomic destruction. After the shock of the blast they looked around and saw NOTHING; for miles in every direction, thousands of people were dead and every building was destroyed … except for the four priests and their rectory. Although wounded, they survived, and afterwards suffered no radiation sickness. 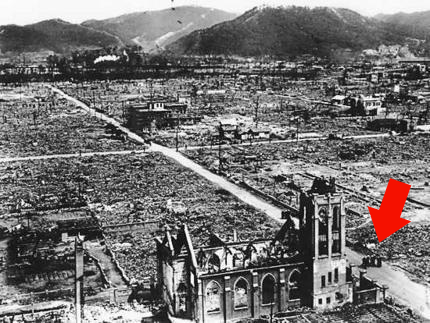 “It took only a second: a flash—fearfully frightening—and Hiroshima, home of half a million people, was wiped off the earth. What was left was only darkness, blood, burns, moans, fire and spreading terror.”

We have come to know by experience or faith that God leaves not our prayers unanswered. He either answers yes, no or wait. We can be joyful no matter what the outcome. For He never leaves us alone; not in yes, not in no,  nor in waiting.

5 Responses to Power in Prayer